“Man cannot discover new oceans unless he has the courage to lose sight of the shore.” ~ André Gide

1880, Whiting started teaching a course on Practical Astronomy at Wellesley

Would visit MIT to pick up th latest ing spectroscopy and Xrays etc.

She was also author of several articles in Popular Astronomy, including:

"Use of Graphs in Teaching Astronomy"

"Use of Drawings in Orthographic Projection and of Globes in Teaching Astronomy",

Only 4 more delta 4 heavies left then vulcan takes over.

The tale of the bamboo cutter;

Descriptions of a Lunar capital city stretch back to at least the 10th century. The Tale of Princess Kaguya

A mysterious girl called Kaguya, discovered as a baby inside the stalk of a glowing bamboo, by a childless bamboo cutter called Taketori no Okina, he raised her with his wife. She became a beautiful princess. She had many suitors, but none could fulfil her impossible tasks. Eventually, the emperor fell in love with her, she stayed in touch but revealed that she must return to the moon from where she had been spared a celestial war, A flying saucer was sent to collect her and with a blinding light, it took her away.

She left the emperor a message and an elixir of life, but he did not wish to live forever without her, so he gave his soldiers the task of burning both at the nearest mountain to heaven, and the mountain became known as Fuji (after immortality) and the smoke can still be seen rising toward his love.

Also in the Vera Historia, the 2nd-century satirist Lucian of Samosata wrote the first detailed account of a trip to the moon one of the earliest science fiction narratives

Permanent human habitation on a planetary body other than the Earth captures the public imagination like nothing else and is a staple of science fiction. We’ve talked about the habitats in space, but let’s have a look at the two most likely.

In 1638 Bishop John Wilkins wrote A Discourse Concerning a New World and Another Planet, in which he predicted a human colony on the Moon

In 1954, Arthur C. Clarke and RA Smith wrote the seminal The exploration of the Moon, of which I got my copy from the hamilton airforce base in California, via ebay that is, they proposed a lunar base with inflatable modules covered in lunar dust for insulation. spaceships, assembled in low Earth orbit, launched to the Moon, and astronauts would set up the igloo-like modules and an inflatable radio mast. Subsequent steps would include the establishment of a larger, permanent dome; an algae-based air purifier; a nuclear reactor for the provision of power; and electromagnetic cannons to launch cargo and fuel to interplanetary vessels in space

The big ideas and enablers that make this really viable in the quite short term, we might even see this happen in the next decade!!

Currently the talk of the town is the NASA Lunar outpost, which is the main goal of Artemis.

The project has grown over the years starting with the early military version of Apollo, the LUNEX project from 1958 that was going to construct an Air Force Base underground on the moon, which a year later the Army did their own Project Horizon to test the feasibility of a military base on the moon using Saturn V rockets,

The projected operational date using $6 billion with twelve soldiers was December 1966. Of course, the Nazis had already beaten them to it by several decades, see the Film Iron Sky.

However the current timeline looks nothing like the above, the slightly more believable (barely)

In 2005 under president George W bush a study was done called the Exploration Systems Architecture Study (ESAS), known as the Vision for Space Exploration (and unofficially as "Moon, Mars and Beyond" in some aerospace circles, though the specifics of a manned "beyond" program remain vague). Essentially via a long tedious track gave us SLS and Orion

In 2006 Shackleton Crater in the south pole was selected as a great area to set up camp.

adjacent to a permanently dark region in which there are potentially volatiles that we can extract and use. This sunlit area is about the size of the Washington Mall

The Lunar Gateway has become an essential part of this system.

But still there isn’t really any solid-looking plans here, no real architects plans, I can honestly say I think that Arthur C Clarkes Exploration of the Moon seems more fleshed out than the PLAN at the moment.

Jan Worner of ESA Director General announced what surprisingly is a non-ESA project The Moon Village,

The Moon Village is not one project or one program. It says, 'Let's do it together.'

It’s basically a principle rather than real architecture. Its main goal is to set up international partners to utilise the moon "an understanding, not a single facility" Chine is interested, Blue Origin has already built Blue Moon and looking for something o tag it to,

The Moon Village Association, which sounds like something that runs the harvest festival in your local church hall, has 9 principles.

Related to this is International Lunar Exploration Working Group (ILEWG) is a public forum sponsored by the world's space agencies to develop research and international cooperation towards a world strategy for the exploration and utilization of the Moon, but I can’t find a working website.

Another society is the Lunar Explorers Society or confusingly Lunex.and the have an equally confusing Artemis project.

One name that crops up a lot is that of Bernard Foing who works at Estec, and was Principal Project Scientist for SMART-1, the first European mission to the Moon, Foing has published over 400 articles, including 160 refereed papers, in lunar and planetary science and exploration, solar/stellar physics and astrobiology.[1] He edited 16 books and organized over 50 international conferences and symposia

Russia is planning to begin building a human colony on the Moon by 2030. Initially, the Moon base would be crewed by no more than four people, with their number later rising to maximum of 12 people, using the Federation space craft and Yenisei super-heavy rocket

Super heavy-lift launch vehicles ordered by height. Country of origin, height in metres and payload capacity to Low Earth Orbit in tonnes are listed on the bottom - Thorenn

Plans to bulid a research station on the moon in the next decade using its new space station to go up on a Long March 5B in 2020.

By far the most exciting building material was London-based Foster + Partners architectural firm who proposed in 2013 a building construction 3D-printer technology in January 2013 that would use lunar regolith raw materials to produce lunar building structures while using enclosed inflatable habitats for housing the human occupants inside the hard-shell lunar structures. Overall, these habitats would require only ten percent of the structure mass to be transported from Earth, while using local lunar materials for the other 90 percent of the structure mass. Working with ESA they printed a 1.5 tonne block of regolith based moon block using a 3d printer by Monolite, that normally uses them to make artificial coral reef.

I think it’s fairly obvious we got to practice this stuff on the moon first, I just can’t see a habitat on mars for 20 or 30 years at very best.

So all the same things matter on Mars, radiation protection, lack of gravity, poisonous regolith, extreme cold, energy, except now there is no rescue no easy way back and no easy way there.

But probably the most interesting study when it comes to habitats was done with NASA’s and Bradley University 3D-Printed Habitat Challenge with sponsors including merch genius’ Caterpilla. , one of the NASA 2005 Centennial Challanges 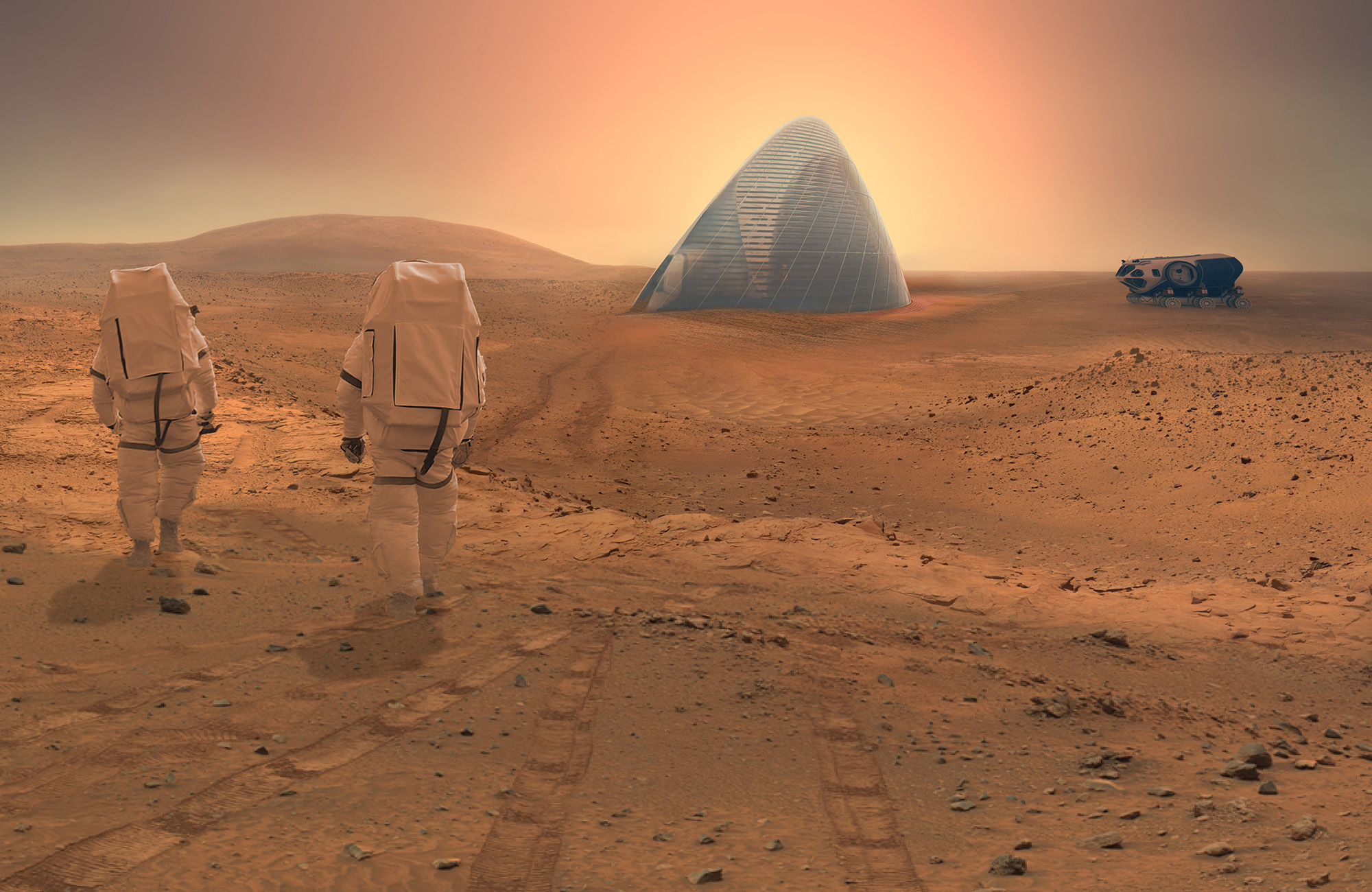 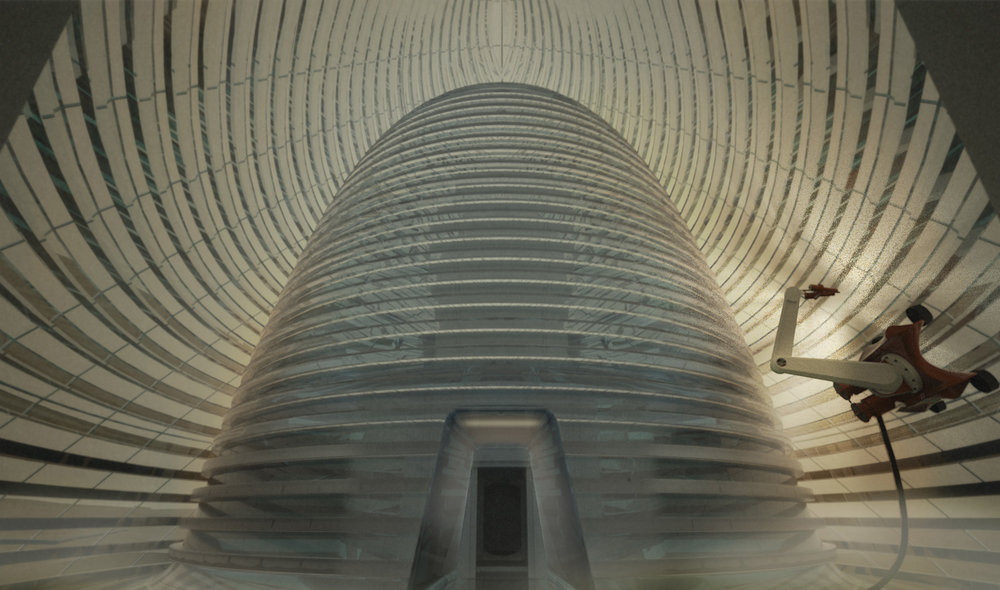 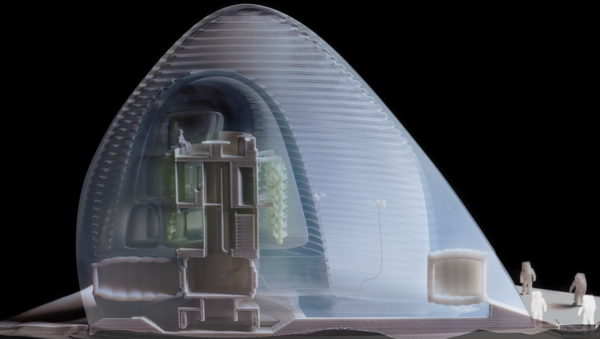 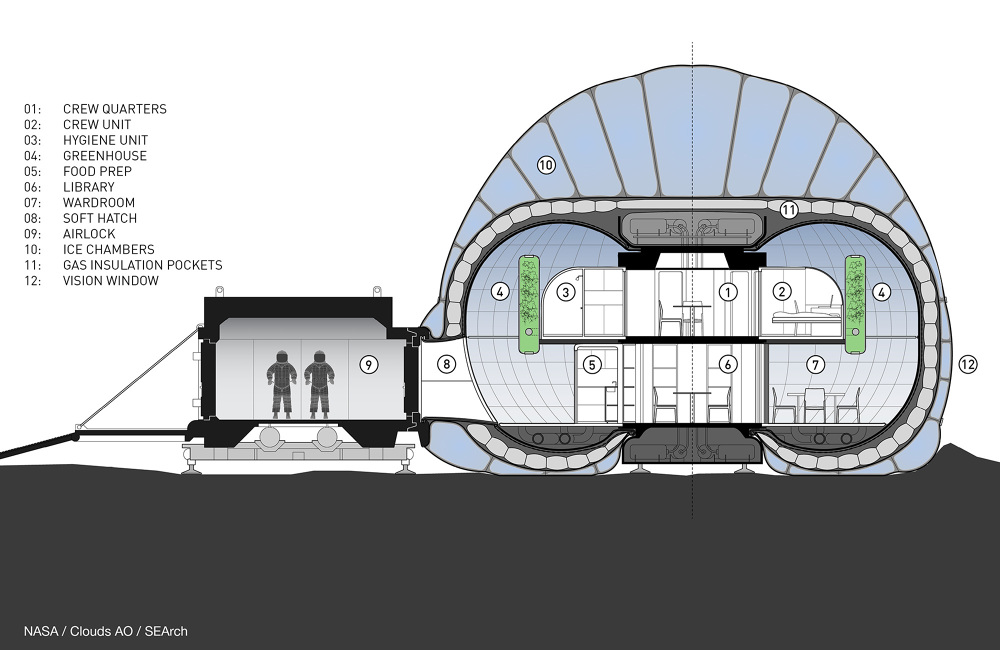 2017 Phase 2 The agency awarded first place and a prize of $250,000 to Team Foster + Partners | Branch Technology of Chattanooga, Tennessee, for successfully completing Phase 2, their inovative materials and structure was the strongest.

MARSHA like the Ice house it’s not another low-lying dome or confined, half-buried structure but a bright, multi-level, corridor-free home that stands upright on the surface of Mars.

After 30 hours of 3D printing over four days of head-to-head competition, NASA and partner Bradley University of Peoria, Illinois, have awarded $700,000 to two teams in the final round of the 3D-Printed Habitat Challenge. The top prize of $500,000 was awarded to New York based AI. SpaceFactory. Second-place and $200,000 was awarded to Pennsylvania State University of University Park, The habitats were constructed in 10-hour increments in front of a panel of judges. Once printing was complete, the structures were subjected to several tests and evaluated for material mix, leakage, durability and strength.

AI Space factory design! MARSHA - In an alien environment 54.6 million kilometers away, construction and materials must be rethought entirely

THEIR FORMULA FOR 3D-PRINTING ON MARS

Nestled in the woods of upstate New York along the Hudson River, their earth spinoff TERA (terrrestial analogue) is available on a nightly basis for anyone wanting to experience what sustainable life could be like on Mars – and on Earth https://www.indiegogo.com/projects/tera-experience-the-future-of-living#/

John Heywood's Proverbes (1546) coined the famous phrase that "The moon is made of a greene cheese", "greene" meaning "not aged", but Heywood was probably being sarcasticThis week we talk about