This week Matt and Colin Philp from the BIS catch up with Xavier De Kestelier at the London Design Museum Mars Exhibition to talk about his Mars Habitat designs. We chat about the strangest asteroid Phaethon with a WISPR. We talk about Mars water maps and the week's launches. 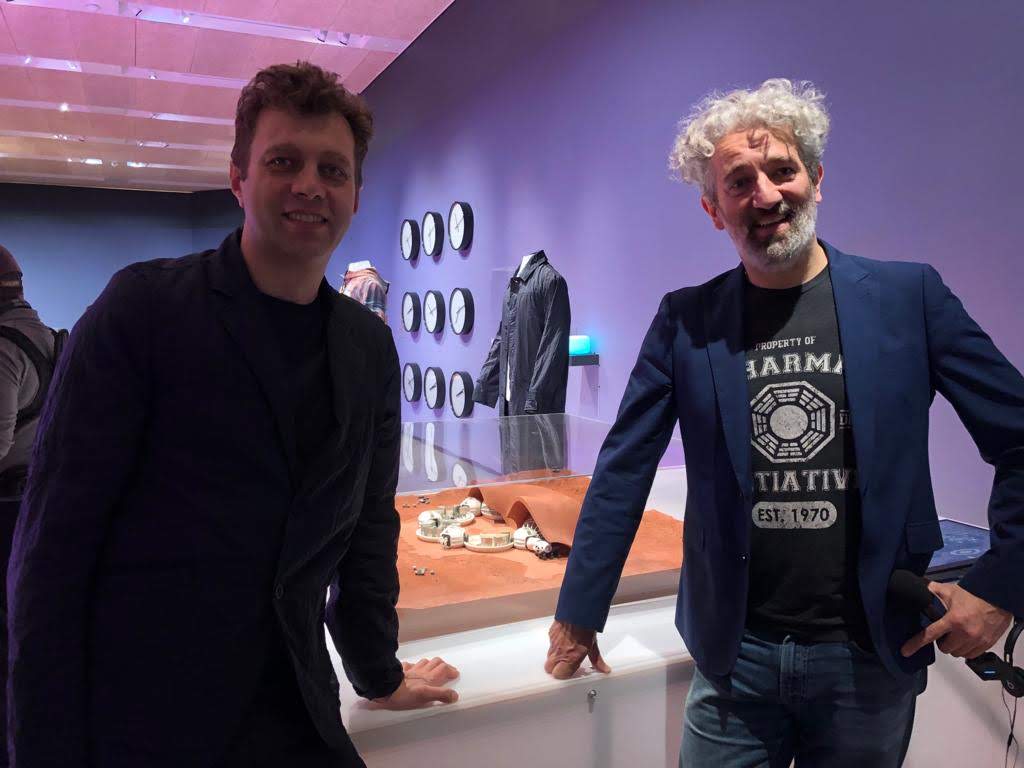 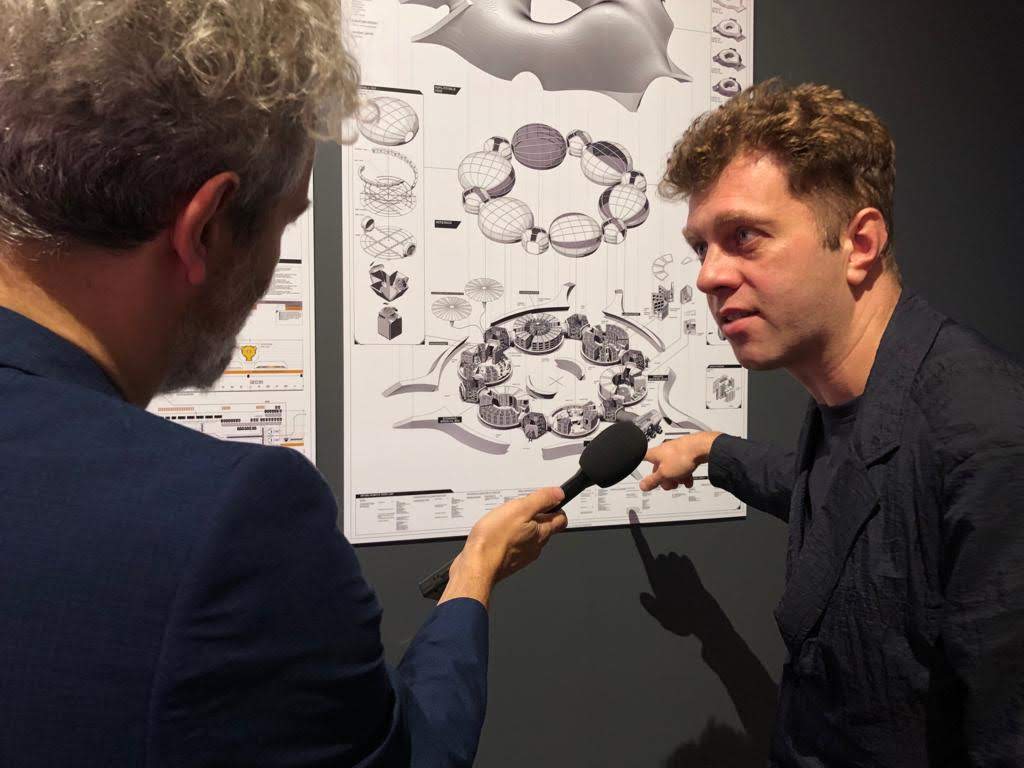 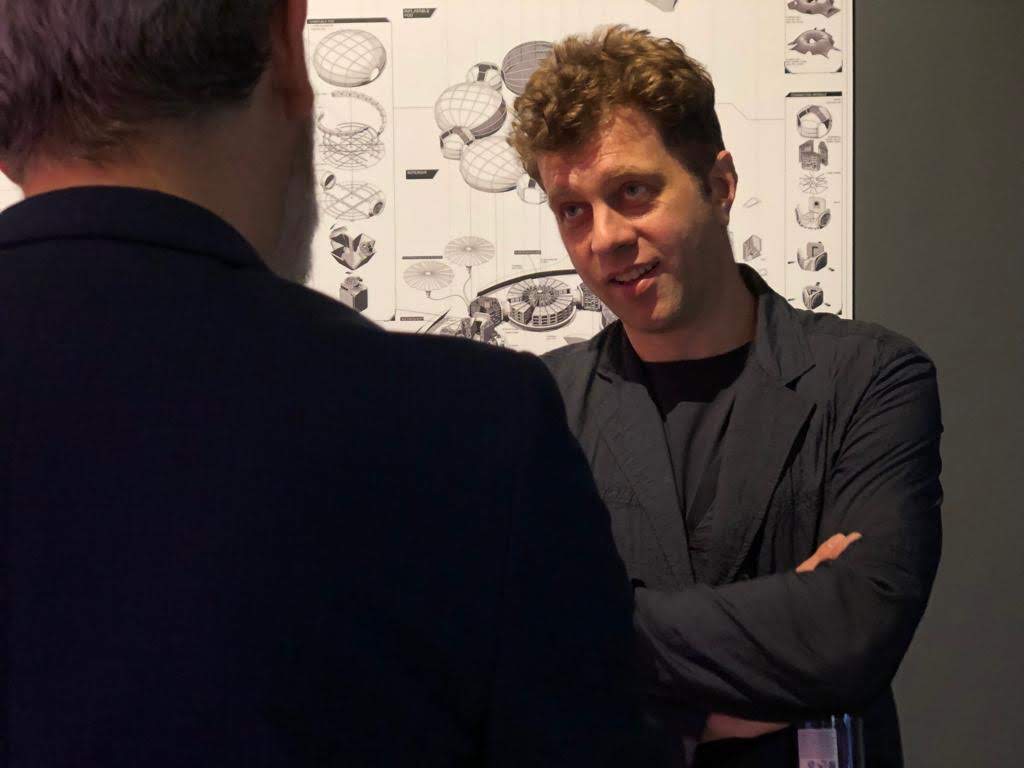 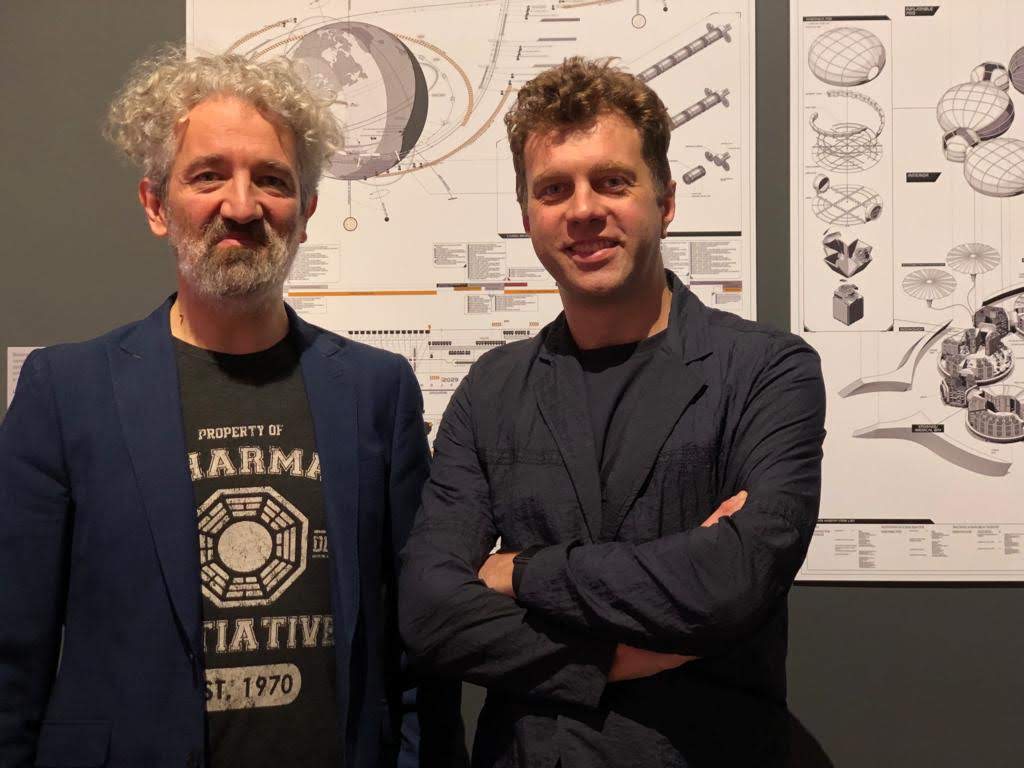 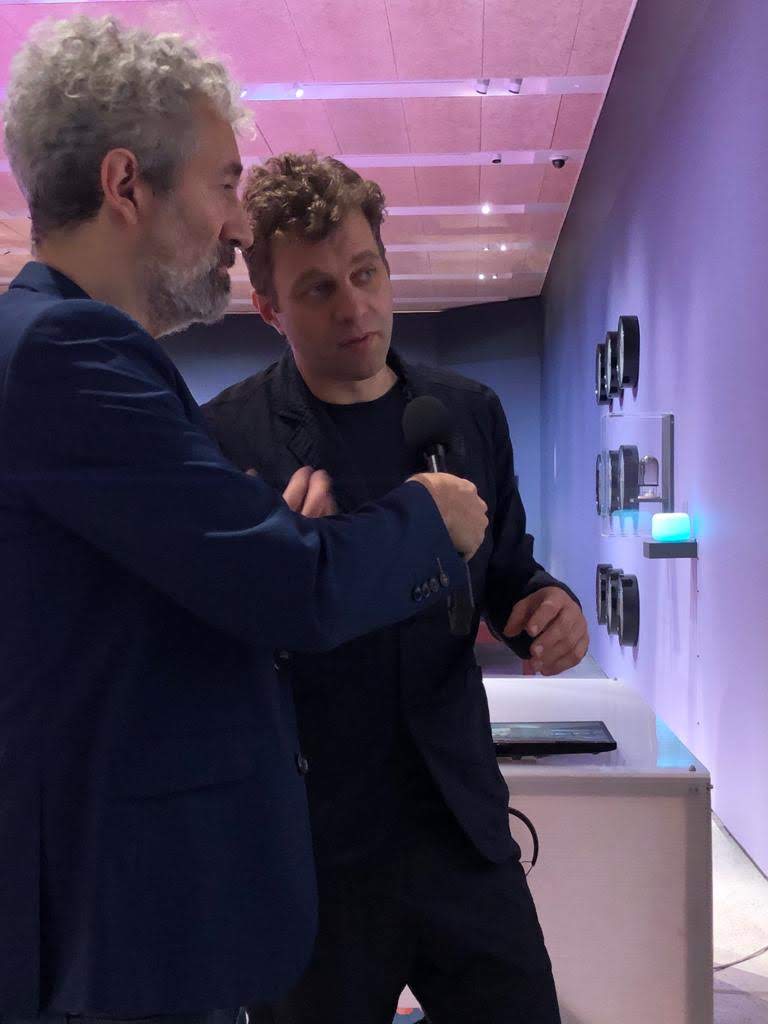 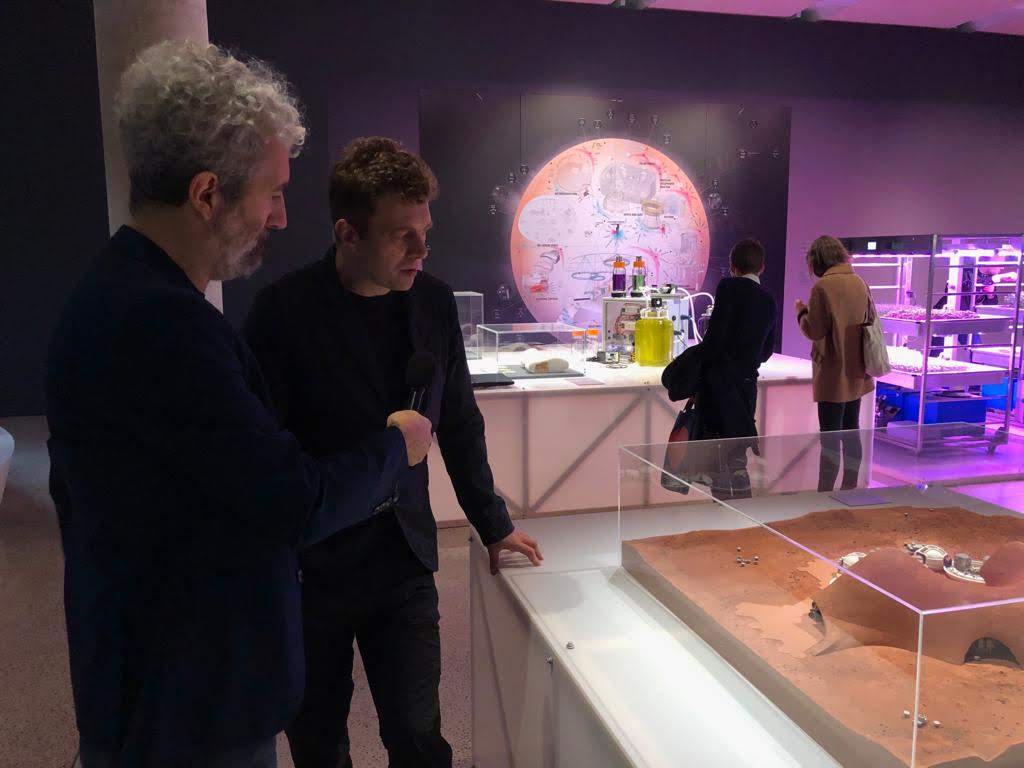 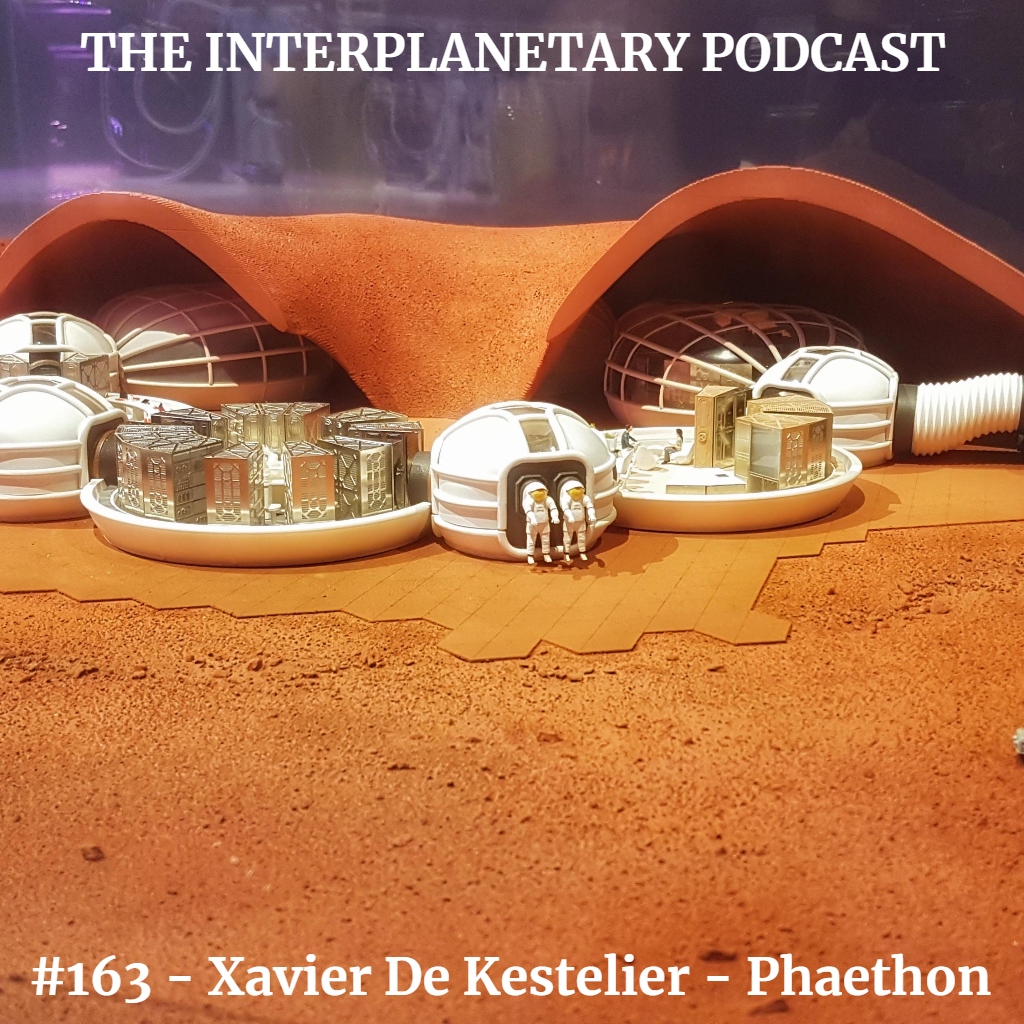 “We need to pull our heads out of the sand because we are refusing to see what’s happening, We need to see the problem to change it and to change ourselves.”

This week’s podcast has been made possible by our two ACE level Patreons. Tasmanian Legend Justin Young and UK legend Justin Roberts. You don’t have to be called Justin to make it to ACE level, Justines are also welcome, and many other names will work, so come join our growing gang of Spodcats on Patreon.com all of whom make this show possible and more importantly worthwhile. Being it’s winter time I’m going to give you snow (space nuggets of the week)

Back in 1999 America was rejigging its area codes and was about to award Chicago with the area code 321, Robert Ozzie Osband was not caught napping and seized the moment. The local resident of Brevard County petitioned that 321 should be used to commemorate the countdown of space launches from Cape Canaveral. He won and now that area has the dialing code 321 since 2000.

Space Mission of the Week

A camera aboard a space probe has conformed an asteroid phenomenon.

Back in 1923, Thomas Edison started the United States Naval Research Laboratory (NRL), a US Navy and Marine Corps science laboratory, whose remit is to look into plasma physics, space physics, materials science, and tactical electronic warfare. NRL’s research expenditures are approximately $1 billion per year and it employs about 2600 staff of which 90 are from the military.

Despite popular belief, the Parker Solar Probe does have a camera on it, admittedly it doesn’t point at the sun, because it would melt, but instead looks at a very wide field (13 to 108 degrees away from the sun). But why.? The Camera built by the NRL, is called The Wide-Field Imager for Solar Probe (WISPR), is designed to study the electron density and velocity structure of the corona, it’s actually made of 2 cameras on telescopes, which together cover more than 100-degrees angular width from the Sun,

WISP takes advantage of the spacecraft's proximity to the Sun by taking coronagraph-style images of the solar corona and features like coronal streamers, plumes, and mass ejections, but this weeks discovery is something else.

"This is why NRL's heliospheric imagers are so ground-breaking," "They allow you to see near-Sun outflows massively fainter than the Sun itself, which would otherwise blind our cameras. And in this case, you can also see solar system objects extremely close to the Sun, which most telescopes cannot do." said Karl Battams at a NASA press conference this week, Battams is a computational scientist in NRL's Space Science Division, whose cometary images have found there way onto APODs, and he has identified a dust cloud trailing behind the asteroid 3200 Phaethon

"Something catastrophic happened to Phaethon a couple of thousand years ago and created the Geminid Meteor shower," Battams said. "There's no way the asteroid is anywhere near active enough when it is near the Sun to produce the mass of dust we are seeing, so we are confident that WISPR is seeing part of the Geminid meteor stream."

TWEET A paper with preliminary analysis has been submitted, but we're gonna need more data in future encounters to really nail down the specs on this. It's a noise-level detection, so a few more photos would also be nice, Much kudos to my colleagues/co-authors Brendan Gallagher, Guillermo Stenborg and Russ Howard, and @UMDAstronomy's Matthew Knight and Mike Kelley

In the meantime, the first batch of Parker Solar probe data has been received and is being poured over by scientists. Parker Solar Probe measured sudden reversals in the Sun's magnetic field. These events, called "switchbacks," may provide clues to the processes that heat the Sun's outer atmosphere to millions of degrees. The Sun’s corona reaches temperatures up to several million degrees Fahrenheit, which is 200 to 500 times hotter than the solar surface below, but Why this is the main question that Parker Solar probe has been sent to answer, and hopefully that full answer will be with us soon. See Podcast 93 for more details about Parker Solar Probe.

Who is the first Scottish Astronaut?

2019 saw another Brit go into space, Dave Mackay flew the Richard Branson’s Virgin VSS Unity higher and faster than any of Virgin Galactic’s previous missions, travelling at three times the speed of sound and crossing NASA’s official boundary for space on February 22. This week he celebrated receiving an honorary PHD from Robert Gordon University, which named him a Doctor of Technology.

“I hope that someone maybe takes some inspiration from my journey from a small highlands village to space.”

Shout out to Neil “Bionic Surgeon” Hopper, friend if patron Bob. Despite losing both his lower legs to sepsis last year has return to work like a legend to carry on as a surgeon in Truro.

Science Article of the Week

A new paper published in Geophysical Research Letters will help by providing a map of water ice believed to be as little as an inch (2.5 centimeters) below the surface, This rainbow-colored map shows underground water ice on Mars. Cool colors are closer to the surface than warm colors; black zones indicate areas where a spacecraft would sink into fine dust; the outlined box represents the ideal region to send astronauts for them to dig up water ice.

This rainbow-colored map shows underground water ice on Mars. Cool colors are closer to the surface than warm colors; black zones indicate areas where a spacecraft would sink into fine dust; the outlined box represents the ideal region to send astronauts for them to dig up water ice. Credits: NASA/JPL-Caltech/ASU

Their results are consistent with widespread water ice at latitudes as low as 35°N/45°S buried sometimes only a few cm below sand‐like material.

Others have already predicted this near‐surface ice on Mars, but this new info solidifies the concepts of;

Basically, this is a map that shows the ice that could be exploited on‐site for drinking water, breathable oxygen, etc., at a much lower cost than if brought from Earth.

His concept for a ‘home’ on Mars – part of NASA’s 3D Printed Habitat Challenge.

Xavier De Kestelier is the Head of Design Technology and Innovation at HASSELL studio. Prior to this, he was co-head of the Specialist Modelling Group, the research and innovation arm of Foster + Partners.

Xavier has led several multidisciplinary research projects in the field of large scale 3D printing. In his latest work with NASA and ESA he researched the potential of 3D printed habitats on the Moon and Mars

Massive shout out to the rest of the SKLON level Spodcats

Space Launches of the Week